A “Handbook of Feminist Peace Research” was published in 2021 by Routledge. It gathers more than 60 authors, mostly academics, but also activists and artists from all over the world. The handbook is co-edited by Tarja Väyrynen, Swati Parashar, Élise Féron, Catia Cecilia Confortini. Élise Féron, Senior research fellow at the Tampere Peace Research Institute, Tampere University (Finland), answers our questions for the Gender and Geopolitics Observatory (IRIS). 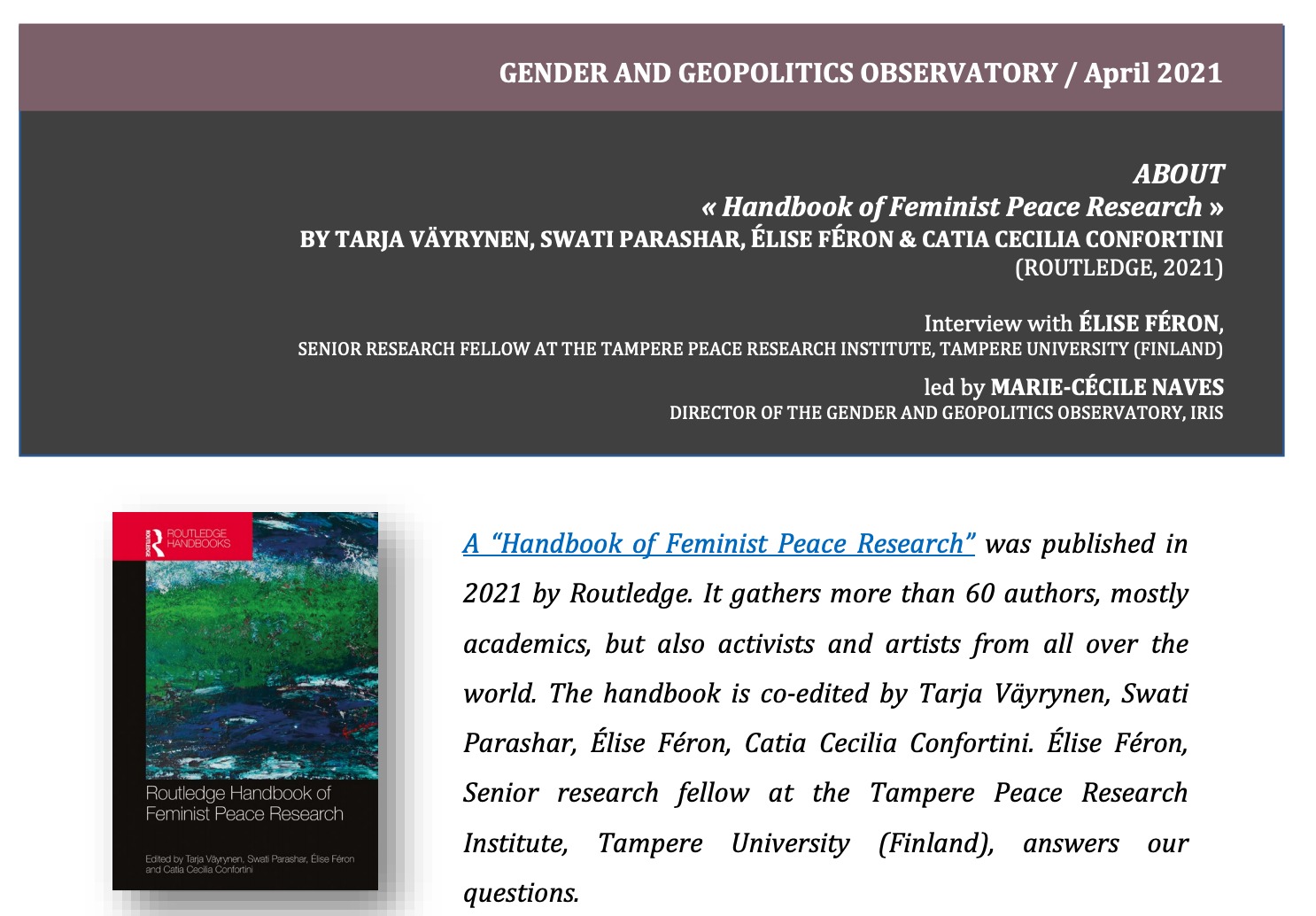 You have just co-edited the “Handbook of Feminist Peace Research”, which gives an overview of feminist approaches to questions of violence, justice, and peace globally. Can you tell us why you chose to write this book?

Élise Féron: First of all, I want to underscore that this is a handbook meant to be used by everyone, from students to policy makers. A Feminist Peace Research Network was created a few years ago by Tampere University, Lund University (Sweden), and the Arctic University of Norway. It now gathers around a hundred members, including many academics in the Global South, who develop feminist perspectives on peace. My co-editors and I wished to “undiscipline” or “disturb” conventional understandings of peace and conflict. In other words, we wished to push the conversation further, as in our view peace and conflict research had become quite stagnant over the past decades. This is the first book collecting such essential research.

Our objective was then to center topics that had not been much looked at in traditional peace and conflict studies, like self-care, the body, or types of violence that have not been at the center of attention like natural disasters, famines, etc. We also wanted to move the margins to the center: what has been silenced in conventional peace and conflict studies, what needs to be brought in? For instance there is a considerable wealth of feminist research that is not very well known, and that has provided an important critique of conventional peace and conflict concepts. We also wanted to revise and challenge the existing conventions and essentialization patterns around the notions of peace and violence, and show that how they are usually defined excludes multiple forms of violence that are likely to primarily affect disadvantaged groups in society, such as women and minorities, notably sexual minorities.

What are the main lessons of your book?

First, I would say that there are multiples definitions of feminist peace research, multiple approaches but one thing that they all have in common is the centrality of the idea of justice. Our handbook shows that there can literally be no peace without justice. And that there can be no real solution to global problems without a critical and interdisciplinary feminist analysis, because all these problems, all these forms of violence that we are witnessing today, from wars to famines to inequal access to healthcare, are inherently gendered and affect people differently depending on their positionality. So the handbook builds on feminist and gender analysis by showing how violence, war, injustice, as well as peace, are gendered, but it also demonstrates that by adopting a feminist approach we can open options for better addressing these types of violence.

We also have to pay attention to less spectacular, to everyday and mundane instances of violence.

Second, the handbook explores the idea that peace is not a singular or linear event, but rather a process with multiple contestations and challenges. In other words, there is conflict and contestation in peace, and vice versa. So most of the authors in the handbook define peace in relation to violence and security, and not by an absence of violence. Their insights show that peace and violence are co-constitutive. This is very important because it destabilizes one of the central binaries that characterizes peace research, the binary opposing peace and violence, by foregrounding the idea of a continuum of violence. The idea of the continuum of violence is that there is a constitutive relationship between different forms of violence, from the local to the global, but also from so-called times of peace, to times of war. This has important practical consequences, as it underscores the need to pay attention to patterns of violence even in societies that are deemed peaceful. The handbook also challenges other binaries, such as the men/women one, or the theory/activism one. Feminist peace research is normative by essence, and as editors we have also tried to reflect that by inviting activists, artists, etc., to contribute. There can be no feminist peace research theory without activism. The ultimate goal is to have an impact on society.

Third, we need to go beyond usual distinctions that are made between structural, physical and symbolic violence, and to pay attention to other forms of violence that are less visible but as destructive, like slow violence or epistemic violence. For instance phenomena and events like natural disasters, climate change, or famines, etc., affect people in very gendered ways, and some of the violence that they entail is erased, silenced and marginalized. The authors in our handbook show that it is not enough to look at major episodes of violence, but that we also have to pay attention to less spectacular, to everyday and mundane instances of violence. These types of violence attract less media attention, but they are likely to disproportionately affect some sections of the population, like women belonging to disadvantaged groups or to some cultural or religious minorities, or LGBTQI+ individuals, and so on.

The book shows that feminist thinking is key to analyze conflict issues and to find solutions to promote peace. So, feminism is not only a matter of women’s rights.

Definitely. Many issues considered as “gender neutral” actually refer to forms of political violence which affect differently women, minorities and poor people. But the way these forms of violence are generally reported overlook this gendered dimension. The same goes for natural disasters like tsunamis: women and girls are not taught how to swim so they are more likely to die than men and boys. Some kinds of violence are silenced because they are seen as less important, that is to say they refer very often to what is “feminine”. Simultaneously, we tend to underestimate some types of knowledge elaborated by women and minorities. As a consequence, multiple life experiments and experiences of violence are not taken seriously. Yet, isn’t it part of universal violence? If we do not unveil it, there can be neither peace, nor justice.

How far can your research be a tool for policy making?

This handbook is for everyone interested in these issues, particularly in justice. It will be of great interest notably to policy makers as far as peace and conflict studies, security studies, international relations, and development policies are concerned. Although we did not include policy recommendations, my co-editors and I think it is urgent to address the issue of justice in any form: many topics the book is about, such as natural disasters, health, military, and migration have concrete and immediate aftermaths.